Greetings, everyone. From time to time we’ll be adding information to the CUPE Local 46 website that you may find relevant. This post comes to us from Progress Alberta via one of our members.

Progress Report #224
Your weekly update on Alberta politics for July 7, 2020
on the web at theprogressreport.ca/progress_report_224

A brief Jim update. He’s still in the hospital. He has responded to treatment but he has also had some setbacks so you get me again for this newsletter.

A quick thank you as well to all the lovely folks who sent Jim a message or who donated from the last email as well. We picked up 23 new monthly donors as well as several generous one-time donors Thank you so much. Like a lot of organizations we are concerned about our finances and this goes a long way.

And if you wanted to become a monthly donor but for whatever reason you didn’t get around to it last week here’s the link to donate. Even $5 a month goes a long way.

Powerful institutions don’t want us holding them to account

First off it was the UCP government. They tried to bar us from the media lockup for their disastrous 2020 budget by calling us an “advocacy organization” instead of a media outfit. A judge disagreed and we got into the budget lockup and the UCP government had to write us a $2000 cheque.

Now it’s the Edmonton police who don’t want to answer questions. Late last week we got an email from a supervisor with the Media Relations Unit with the Edmonton Police Service. In the email he made it clear that we weren’t considered media and that media relations staff would not be answering further questions.

We sent him the judge’s decision and the affidavit our lawyer filed in that case but we’re still waiting to hear back from the EPS. And that brings us to a bit of original Progress Report reporting.

We’ve talked about the statue of Roman Shukhevych outside the Ukrainian Youth Unity Complex before on the podcast but now we’ve got a statement from the Ukrainian Youth Unity Complex in north Edmonton denying that the statue of the Nazi collaborator war criminal they have outside of their building is, in fact, a Nazi collaborator war criminal.

They say that all the evidence that says that he was is fabricated by the Russians. Our story gets into the historical facts and has some interesting quotes from B’nai Brith who are working on this issue. The Shukhevych statue was vandalized in December of 2019 and apparently a hate crime investigation was opened. However the Edmonton Police did not respond before we published as they’re still figuring out whether we’re media or not.

Legislation coming that privatizes healthcare and goes after unions 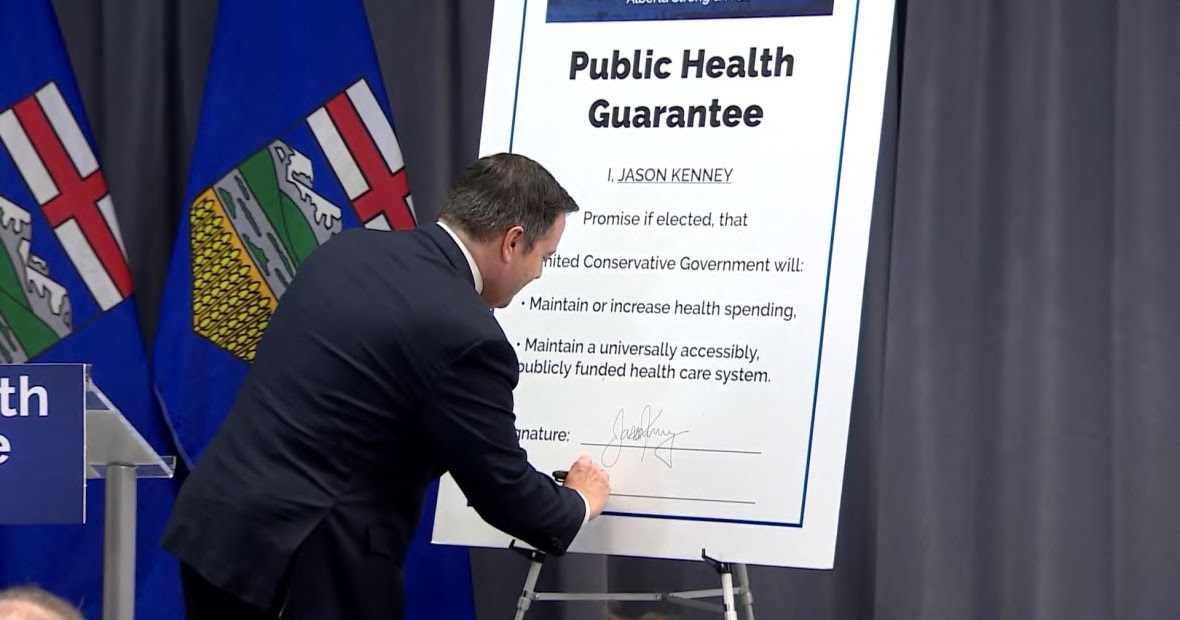 I know we used this picture last week but Kenney’s government just keeps privatizing healthcare so we’re duty bound to trot it out. The UCP have just started the process of rolling out Bill 30, a health care omnibus bill, in the provincial legislature.

According to David Climenhaga, “the two most striking features of the health care omnibus bill introduced yesterday by the United Conservative Party are that it opens the door to a higher degree of privatization and two-tier health care and escalates Health Minister Tyler Shandro’s feud with the Alberta Medical Association.”

Sandra Azocar with Friends of Medicare didn’t mince words either.

“Bill 30 represents yet another step in the systemic process of privatization that this government has been committed to since prior to the election,” says Sandra Azocar, Executive Director of Friends of Medicare. “It signals that this government is unable or unwilling to learn the necessary lessons from a pandemic that has made abundantly clear the importance of a responsive public health care system.”

And under the guise of “driving economic growth and investment to Alberta” the UCP will unveil their latest round of union busting legislation. It’s going to be unveiled today and it’s expected that it will weaken or even lower the minimum wage probably through employer exemptions and reduce the resources of unions by introducing the ability of members to opt-out of certain parts of their dues. We’ll be keeping an eye on this.

That’s all for this week. Please share our newsletter with any friends or family who you think would like political news and commentary from a progressive point of view. If someone forwarded this newsletter to you, you can sign up for it here. If you would like to support our ongoing work, please consider donating to help us keep going.